All articles tagged with "Scat Eater"

Lady Nicole is a strict mistress and she likes her instructions followed to the letter. She questioned her slave why he had not done what she had instructed him and when he could not give her a satisfactory answer, she had to punish him. She decided to give a harsh punishment so that he would learn a lesson and never do it again. She shit on him and forced him to eat her shit.

Mistress Anna wanted to test how much this guy was into her. She told her she had weird fetishes as if to put him off. But the guy said he was ok with it so she told him to get naked after which she made him eat her shit. The guy did not anticipate what she did to him but he ate her shit. The mistress then told him she had another fetish knowing he would agree. She used it as a way to get rid of him.

Goddess Amirha foces guy to eat her ass out

Goddess Amirha has a sexy ass and this guy fell for it. He wanted a piece of it and she agreed. What he did not know was that she had her own trick up her sleeve. As they had foreplay, she facesat on him and he loved how her ass was on his face. But his joy was short lived as she shit on him and made sure he ate all the shit.

This mistress does not like slaves who are loud mouthed. She had to show him why he had to learn good manners. She used him as her human toilet and made him eat her shit and drink her pee. She ignored his pleas for mercy and went ahead to humiliate him and degrade him till she thought he had had enough. He was taught a lesson he will never forget in his life. 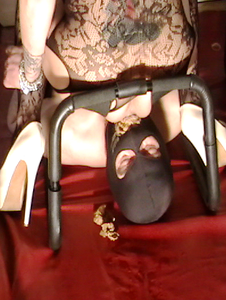 Mistress Anna and her scat fetish

Mistress Anna likes to shit on slaves. It is the one thing that makes her happy and that she can do any time of day or night. She did not need an invitation to punish her slave and make him eat her shit. She knew he had messed up the minute she walked into the house and in deed he had. So she took the opportunity to make him eat her shit and lick her asshole.

Mistress Roxy was asked to try scat fetish by her friend. Her friend had described it to her and she found it funny. But being adventurous, she decided to try it. She got a slave and she made him eat her shit and even burnt him with her cigarette. It was much more fun than she had hoped it would be. She even became more addicted to it than her friend who introduced her to it.

Mistress hunts down thief and cruelly punishes him

This loser stole mistress Gaia's stuff and ran away. He did not know she had CCTV cameras in her apartment and knew who he was. She hunted him down and since he himself did not know who she was, she did not have a hard time befriending him and going with him to her place. She did not want her things back since she had bought new ones but she made sure he will never steal again. She made him eat her shit and swallow it and degraded him badly.

Goddess Amirha has a thing for scat fetish. She likes how it turns her on. She likes how cruel it is to the slaves and losers. It had been long since she had enjoyed it so she went out today and got a loser. She looked for a flimsy excuse to humiliate him and she took him to her place and made him eat her shit. She punished him hard for something he knew nothing about.

Mistress Anna was checking random things online whens he came across shit fetish. She was so intrigued by it that she did more digging and became interested in it. She wanted to try it. No. She was dying to try it. She went out and came back with a loser who she bullied and forced to eat her shit. The experience was out of this world and she loved it so much she became addicted to it.

Miss Cherie takes advantage of guy with a crush on her

Miss Cherie had a cruel idea. She wanted to take advantage of this guy's crush on her to humiliate him and have fun at his expense. She did not have anything against the guy. She is just a cruel mistress. She called him and made sure they were alone and made him believe it was a big deal for him to eat her shit and she kinda forced him to do it.